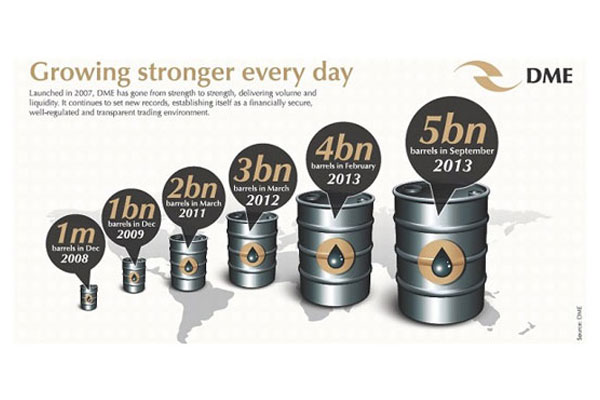 Dubai Mercantile Exchange (DME) is this month celebrating its fifth anniversary. Since its launch in June 2007, DME has established itself as the premier international energy futures and commodities exchange in the Middle East, recording consistent year-on-year trading growth. The Oman Crude Oil Futures Contract (DME Oman), the Exchange’s flagship contract, is now the most credible oil benchmark relevant to the Asian market.

In 2012, trades on DME passed the 3 billion barrel mark, with a total of 3.478 million contracts (eqv. 3.478 billion barrels) traded on the Exchange and annual average daily volumes growing at an annual compounded rate of 31%. Volumes for DME Oman have surged in the first half of 2012, reaching a record 141,129 contracts (141.129 million barrels) in May, an increase of nearly 17,967 contracts over the previous record in April of the same year, and an impressive 78% growth over the same period in 2011.

DME’s Chairman Ahmad Sharaf said:
“Our consistent growth in trading volumes over the last five years – a trend that has accelerated in 2012 – is an indication of the growing importance of Asian demand for oil in the global marketplace.

“This growth in demand drove the need for a credible crude oil benchmark for global oil sales to Asia, and that’s exactly what DME Oman is providing. After five successful years managing DME Oman, the largest physically delivered oil futures contract in the world, the contract has become the world’s third official benchmark for oil trading, alongside West Texas Intermediate (WTI) and Brent.

“Operating in a regulated environment, DME provides easy entry into the world’s fastest growing commodities market and the largest crude oil supply/demand corridor in the world. With enhanced resources, the backing of our shareholders and five years of sustained success behind us, the DME Oman contract and DME are perfectly positioned to go from strength to strength over the next five.”

DME is regulated by the Dubai Financial Services Authority (DFSA) with recognition or no action letters from more than 20 other regulatory jurisdictions in key oil trading centers. A significant proportion of trades on the DME are converted into physical delivery, and the amount of trading in DME Oman ensures the OSP is a true reflection of market dynamics.