This coming January sees the implementation of International Marine Organization (IMO) 2020, mandating the shipping industry to switch to the cleaner 0.5%-sulfur bunker fuel and ditch the current 3.5%-sulfur grade. The switch has been widely flagged as the biggest single change to the oil sector, impacting the entire supply chain from crude oil values and refining economics, right down to end-user consumers.

As the markets move ever closer to implementation date evidence so far suggests the oil industry has largely avoided some of the more pessimistic scenarios, including major shortages of middle distillates or huge volatility among benchmark crude oil grades.

As expected values for heavy 3.5% fuel oil have tumbled during the fourth quarter of 2019, but perhaps more surprisingly distillate markets have been remarkably calm in the run up to IMO 2020. In Singapore the ultra-low sulfur 10ppm Gasoil has been falling in relative values during Q4 – dropping to around $15/barrel over Oman crude oil compared to around $18/b at the end of Q3. Over the same period 3.5% high sulfur fuel oil has moved from a small discount of around $3/b under Oman -- albeit due to a temporary shortage of heavy fuel oil during the transition period -- to around $25/b under Oman crude at the start of December.

In its latest monthly report, OPEC noted that the transformation appears to be going as well as can be expected; "Recent assessments indicate that the global refining system will have sufficient flexibility to address the changes in the maritime sector's fuel mix," the report said. "Nevertheless, the impact on high sulfur fuel oil prices, the gasoil/HSFO spread, as well as HSFO-rich crude oil prices, will still be significant, although less severe than previously expected."

For crude oil market watchers the change in refined product specifications and relative values can have a major impact on crude spreads, but so far the anticipated volatility between key benchmark grades has yet to materialize and the lower sulfur crudes are generally underperforming against their higher-sulfur equivalents. The key spreads tracking North Sea crude versus Middle East/Asia -- namely Brent/Oman and Brent/Dubai – continue to trade at historically low spread levels as supply shortages in the heavy crude oil market underpin the heavier Middle East barrels compared to the lighter North Sea complex.

The move to 0.5%-sulfur Marine Fuel was expected to leave the heavier Middle East barrels far more exposed to changing conditions than the lighter crudes from the North Sea. when IMO 2020 was initially announced in 2016, many forecasters were expecting significant widening of the light vs heavy crude spreads.

However, a combination of sanctions and production problems has severely curtailed exports from Iran and Venezuela -- both key suppliers of heavy crude oil -- while firm OPEC compliance has also prevented an oversupply of Middle East crudes hitting the market ahead of the IMO 2020 transition. On the other side, the expansion of US shale markets has kept light crude oil well supplied on a global basis. 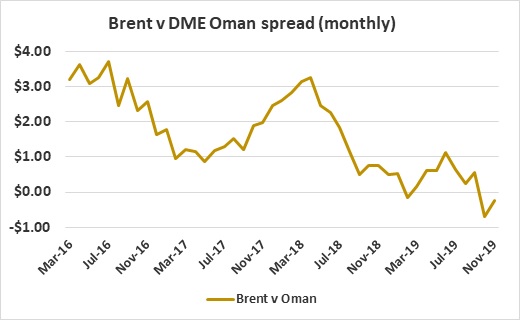 Historically Brent has commanded a hefty premium over Oman, but during 2019 that premium has average just $0.30/b and Oman has regularly traded at a premium to its lighter North Sea counterparty. At the time of publication (Dec 5, 2019) Oman was trading at around $0.85/b above Brent on the DME. Likewise, the Brent/Dubai spread has been trading at historically low levels and heading into 2020 Brent’s premium over Dubai stands at around $0.30/b for barrels loading in February.

Oman is the largest single-stream benchmark crude in the world at around 1 million barrels per day of production. But both Brent and Dubai production levels have declined sharply since the early 2000s, which means both are supplemented by alternative-delivery grades from the same geographical region.

In recent years the North Sea market has predominately been set by Forties crude oil, which at 0.8% sulfur is lower than that of Oman’s at around 1.5%. In theory IMO 2020 should have supported Brent values over Oman, but tight fundamentals for medium and heavy crudes appear to be overriding the IMO 2020 regulation, at least for now.

Meanwhile Oman currently stands at around $1/b over Dubai, which for the last three years has largely been set by Abu Dhabi’s Upper Zakum crude. Upper Zakum has slightly more sulfur than Oman at 1.8% content, but Oman’s better distillate yield has kept it at a premium to Upper Zakum, and therefore Dubai.

A further alternative grade for Dubai is Qatar’s Al Shaheen, which at 2.3% sulfur is the highest among the ‘Dubai basket’ of crudes. Based on January-delivery crude trading during the month of November Upper Zakum was still setting the price of Dubai, although it remains to be seen what happens once IMO 2020 is fully implemented.